(2020-09-24) • This site includes a cool 1990’s retro-style tribute to the great membership-based site 3D-Passion.com! It is featuring my artworks (3D wallpapers) I made as a passion between 2000 and 2003, which were purchased by people on the site. During 2016 I finally closed the commercial website, since it was no longer making sales, and I created an initial small tribute website with a small message from me while offering all the source artworks in high-resolution 100% free to the current visitors! It has been very cool that 3D Passion still managed to get people subscribing up until nearly 2014, even as everything digital is now available for free on the web! This was the year of my last customer…

The first-ever logo of 3D Passion, created before 2000.

As royalties for the artworks stopped as well, I knew it was time to close the adventure. Much to my surprise, after closing the website in 2016, people were still searching the exact site address on Google from various countries, which is a proof that 3D Passion had been more than a few wallpapers sold within subscriptions during the early years of the web. Moreover, I was still being contacted by some fans, which sparked me the idea to give it a real tribute and to include the other artists I licensed during the exploitation years of 3D Passion.

I remember that users were very happy with the wallpapers, and the initial community-driven site was a success around that passion about 3D pictures and 3D renders (I had a forum, images contests, community 3D models, 3D software advertisers…), which is now a very common thing nowadays, due to the cinema, Hollywood and the increase in computational power. So I hope you will like this tribute website and the original artworks, for my part it’s been a pleasure to create these artworks, manage the website, deal with all my fans, customers, and all the other visitors, also with the professionals who licensed my artworks and all the other artists I had some talk with! I am very grateful for having lived this adventure… Working and earning money with one’s passion and most of all, being able to communicate it with people is something so much exciting and motivating in life! 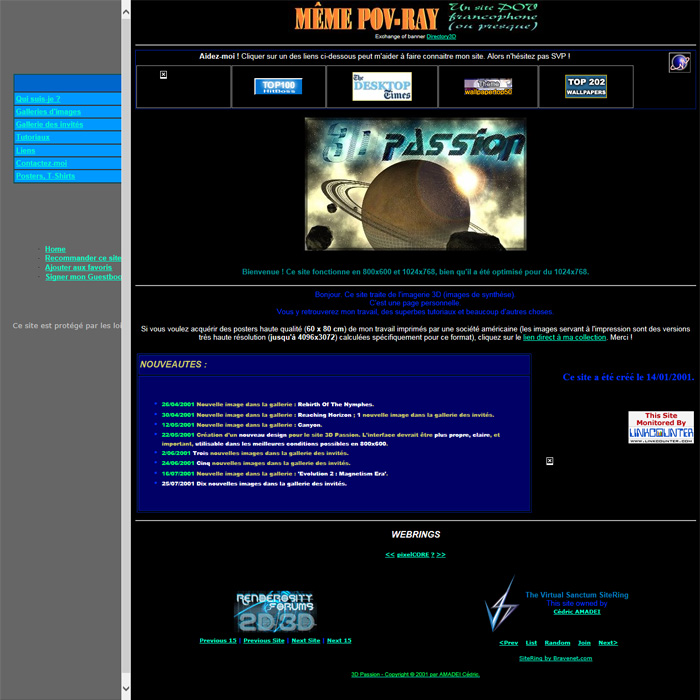 2001 to 2002: First version, a personal website with personal and users’ artworks, guestbook, webrings… 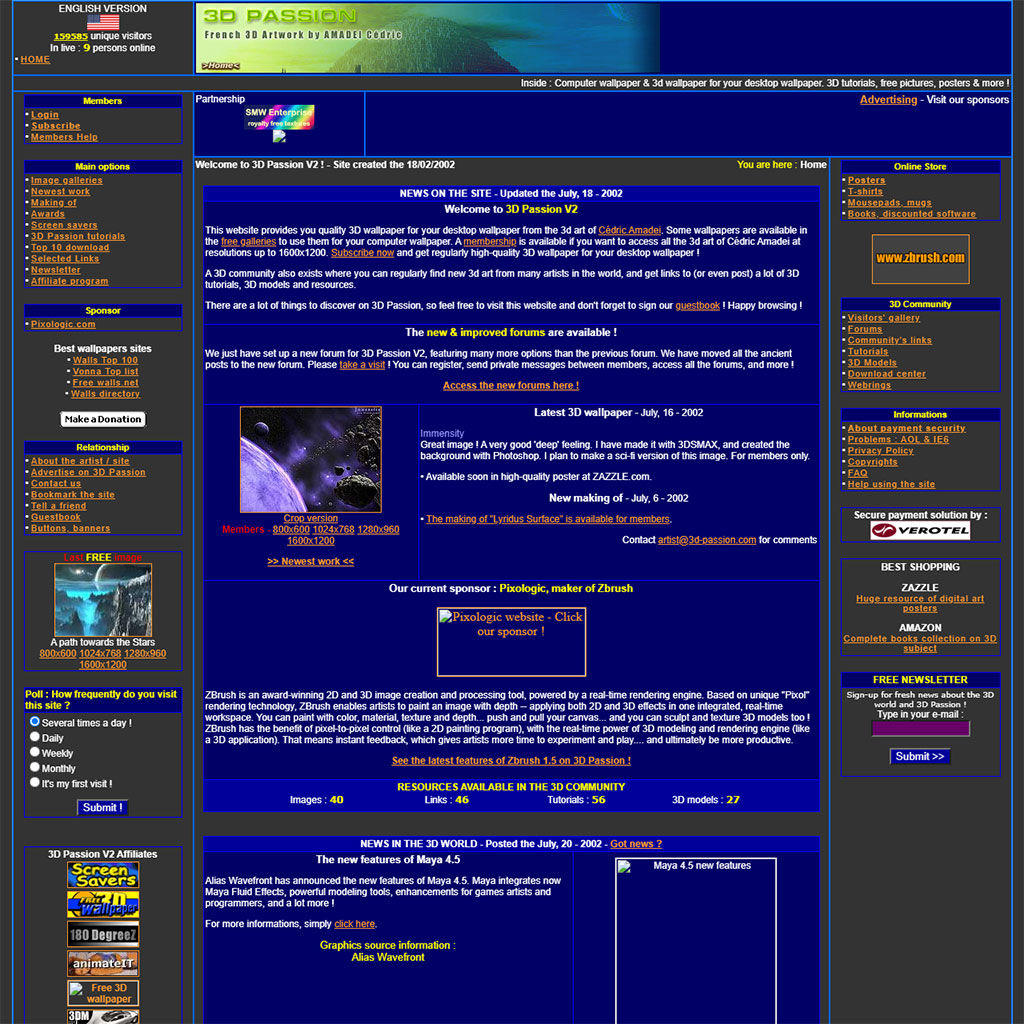 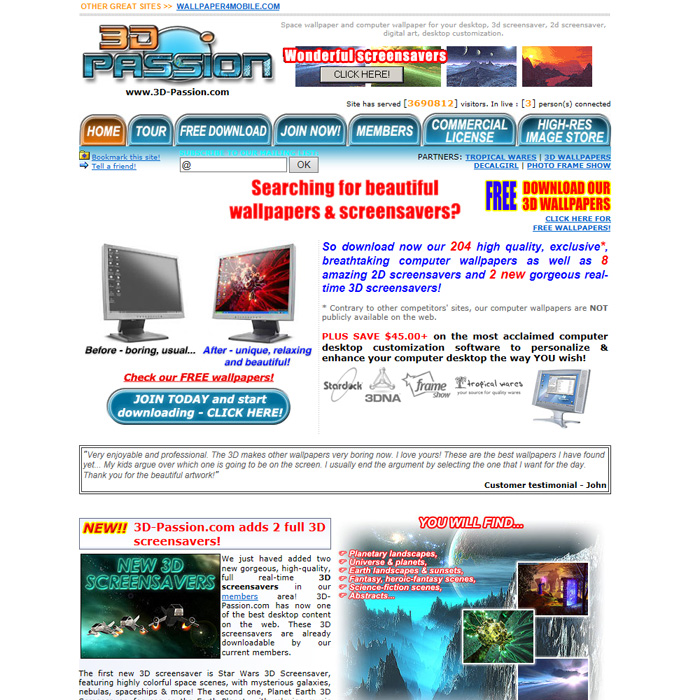 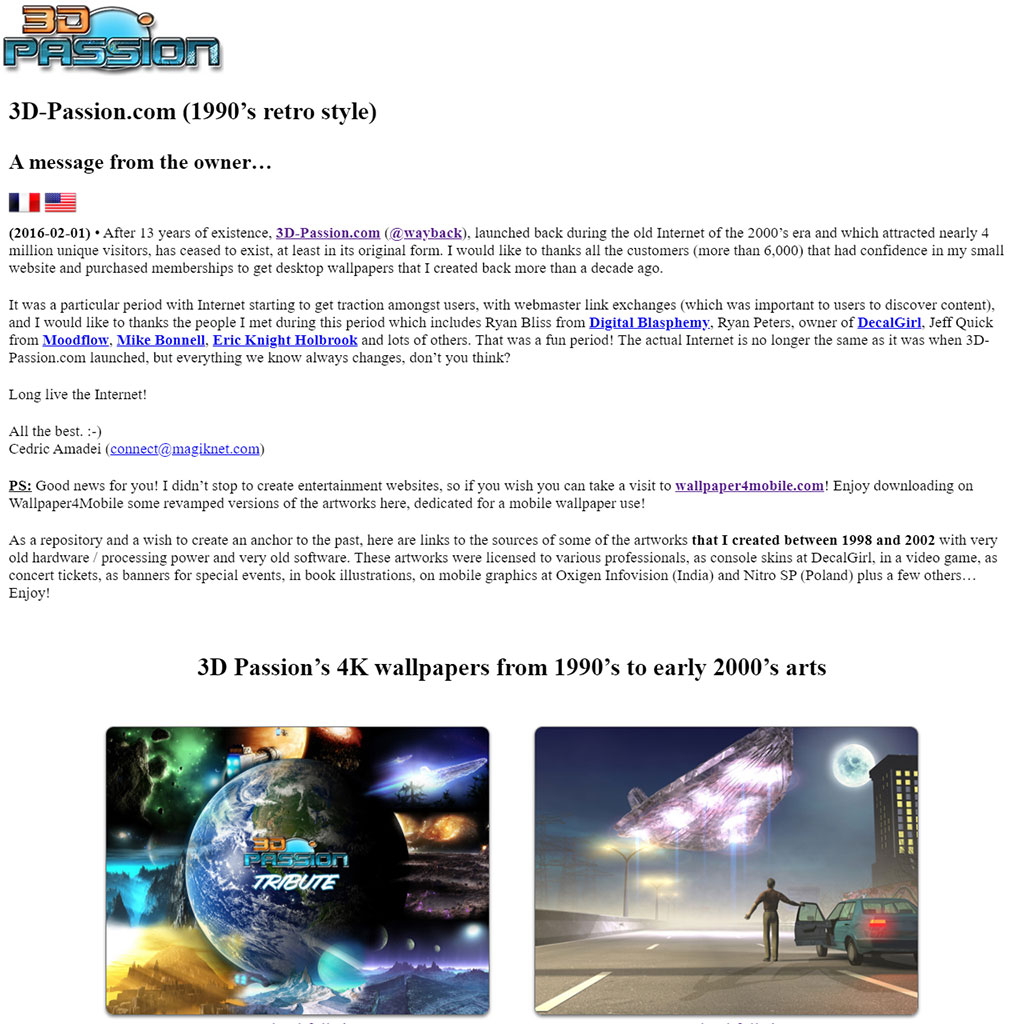 2016 to 2020: 3D Passion V4 first personal tribute, offering all the high-resolution source artworks from 3D Passion for free to the public and some notes about the 3D Passion story.

(2016-02-01) • After 13 years of existence, 3D-Passion.com (@wayback), launched back during the old Internet of the 2000’s era and which attracted nearly 4 million unique visitors, has ceased to exist, at least in its original form. I would like to thank all the 6,000+ customers that had confidence in my small website and purchased memberships to get desktop wallpapers that I created more than a decade ago.

It was a particular period with Internet starting to get traction amongst users, with webmaster link exchanges (which was important to users to discover content), and I would like to thanks the people I met during this period which includes Ryan Bliss from Digital Blasphemy, Ryan Peters, owner of DecalGirl, Jeff Quick from Moodflow, Mike Bonnell, Eric Knight Holbrook and lots of others. That was a fun period! The actual Internet is no longer the same as it was when 3D-Passion.com launched, but everything we know is changing as time passes, don’t you think?

All the best. :-)
Cedric Amadei (cedric@3d-passion.com)

PS: Good news for you! I didn’t stop to create entertainment websites, so if you wish you can take a visit to Wallpaper4Mobile.com! Enjoy downloading on Wallpaper4Mobile some revamped versions of the artworks here, dedicated to a mobile wallpaper use!